Subway graffiti has been a theme in many cities, though New York has to be in the front of that theme. They have had numerous books printed covering the history behind New York subway graffiti. Additionally you can purchase books that are based mainly upon images of subway graffiti.

If you really take a moment and think about it, it makes since. Where the rest of the country has train cars that have been tagged, New York has subways. Add to that the culture and feel of New York and you have to agree that New York would be on top of the graffiti we now refer to as Subway Art.

Subway Graffiti has dated back to before some of us were even born, those of us who were here were possibly still young and barely walking. This happy Holiday Subway graffiti art came out of the 1970’s. Naturally it had been washed off long ago, however this image is a reminder that graffiti more often than not has a message.

Regardless of whether the artist are saying happy holidays, throwing up vibrant images or simply tagging a subway car you have to admit it adds something beyond words. Just look at this image of a subway in motion, see how each car is separate yet still connected as it moves along the tracks. This is urban culture at its finest. It’s true some people will never see the beauty behind graffiti; they’ll always see it as a form of vandalism. Those very people will never be rewarded with the moving and constantly changing art that surrounds them each day.

Many walls have been splattered with every imaginable style of graffiti. There have been whole building, concrete walls and simple tags sprayed onto various building parts. Sometimes, walls and building just aren’t enough, sometimes graffiti targets are chosen for no other reason than the capability of movement. What better way to get noticed than to have moving graffiti that’ll be seen throughout the city. 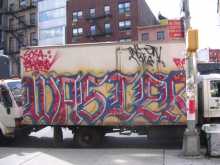 Moving graffiti can take many forms. It can be simplistic and somewhat less notable or it can be elaborate and memorable. Some vehicle owners will remove it yet others seem to accept their new look and who knows maybe they’ve grown to like their new artwork or maybe they’ve just grown tired of washing it off. Whatever the reason, it allows us to see graffiti travel from one side of the city to the next.

Delivery trucks are one way to gain quick notoriety. They make numerous stops throughout the day and travel long distances across highways through community districts and across multiple popular hangout spots. Tagging a delivery truck shows off distinctive names and styles one block at a time. People from all walks of life will notice and the more miles that are driven, the more recognizable the moving graffiti becomes. Within mere days, people will start recalling the image, within weeks people will recognize whichever name is displayed and within as little as one to two months people will begin to connect the name and style that they have repeatedly seen with an image of a person regardless of whether that person is known. That is how every famed graffiti artist has grown to be known and recognized.

Why does some Graffiti remain while other Graffiti fades? 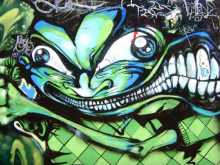 Quality actually is a big factor, quality graffiti has been socially accepted as urban art. Some would even argue that graffiti when done right can add décor to many urban streets, buildings and even vehicles. As artistic as some graffiti pieces are there are others that just appear like random scribbles, usually done in a single color, often black or red. 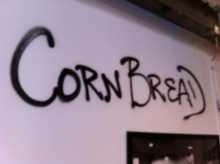 Although written names or more commonly three initials also known as tags have often remained even in cases where the graffiti is no more than a tag. This is usually the case when a tag is found on another artist’s graffiti art. One of the main reasons that a tag would remain is that the tag belongs to a graffiti artist that is respected and well known. 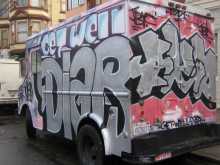 There are times when graffiti remains merely as a message. In San Francisco one of the early graffiti artist, using typical graffiti alphabet style of the early days wrote beach along a wall that was in fact along the beach. This graffiti still stands and has become part of the beach. Another example is the message to get well on the delivery truck pictured, a message to Diar, a well-known graffiti artist who had become paralyzed after a severe car accident in February of 2008.

There is still a huge population that doesn’t see graffiti in an artistic light. In fact some still see it as vandalism and technically against the law. Graffiti as an art will always have differing views attached to it, however more and more people are coming to see graffiti as an art, a part of American culture and the rawest form of expressionism.

The path from single scribbles to pieces of art

Remember when you were young and graffiti was sloppy spray painted words than were often illegible? Somewhere along the way that passed and graffiti opened the doors to a colorful artistic world. People were able to express themselves in ways that may not have been imaginable in the past. What started out as aimless scribbles has become an expression of art, that though not everyone will get it or like it, it’s still art and it’s still valued and appreciated by many. 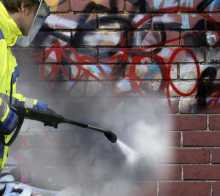 In the early days of graffiti the colors weren’t as vivid as today and more often than not it disappeared before it even had a chance to shine. Graffiti usually disappeared within days by some underpaid worker being told to wash it off. What people just didn’t realize is that no matter how walls were watched or how quickly they were washed graffiti had been born and no amount of water or cleaner could stop its growth.

It didn’t take long before colorful paint began to appear the entire length of concrete walls and buildings. Even the more artistic graffiti that suddenly appeared some time the night before was still often met with water and cleaners. Although it was at this time that more and more graffiti was allowed to remain, this was the beginning of society finally seeing it for what it was, art. 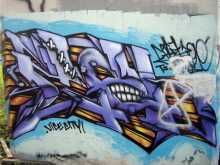 Just like any art, graffiti evolved. It wasn’t long before the colorful lettering turned into images just like this piece pictured that contains a perfect face sprayed right into its dominate lettering. Graffiti has stepped up into the light and is now accepted as art, at least for some.

Cornbread tags Philadelphia one wall at a time

With this first post I thought it would be fitting to take a look back at the man that is considered the Godfather of American Graffiti. There were two famous graffiti artist before Cornbread (Kill Roy and Bird) though it was Cornbread that brought graffiti into the modern world.

Cornbread (Darryl McCray) emerged in 1969 throughout Philadelphia, after being released from juvenile hall. He was a mere 12 years old when he hit the streets of Philadelphia, though his actual first writings began along the walls of his juvenile hall at the young age of 10.  This story, along with the story that turned graffiti into an urban art started out as a story of a boy and a girl. Cornbread had met a girl in his class that he just couldn’t get out of his mind. Like many young boys in love before him he set out to impress this girl (Cynthia) the only way he knew how, with spray paint.

What started out as a way to get a young girls attention quickly gained speed and notoriety as it spread through the streets of Philadelphia and quickly moved on to New York followed by major cities across the nation. Cornbread’s graffiti gained media attention. During his time he wouldn’t often tag a specific wall after reading from media sources that “that it would be amazing if somebody tagged the Jackson Five jet as it landed in Philly.” Cornbread disappeared in 1972, as a result of his own battle with drug addiction, though his art lived on and continued to flourish with new graffiti artist popping up across America.

We Support
Climate Activism
Click to reach the League of Conservation Voters.
Conversation Processing Intelligence™ beta website!
Click here to visit the hub of the Klat Network.
This site is part of the Klat network of blogs, forums, and communities.

American Graffiti - How is it valued

The Evolution of Graffiti

The Godfather of Modern Day Graffiti